I recently had the opportunity to compete at a one-day (four-round) rapid chess tournament put on by the Denver Chess Club. The venue (a nice suburban library branch with the friendliest staff) was almost two hours away by bus and rail, but the tournament itself was only $20. Well worth it for some over-the-board experience. I won two and lost two games to finish in the middle of the pack, and I now have a provisional Quick USCF rating (1510…​ but it is only that high because it is based on my provisional 1610 normal rating. My tournament performance was 1350). I hope the DCC puts on more of these rapid tournaments!

The time control was 25 minutes with a 5 second delay (so that the clock doesn’t start ticking on your turn until after an initial 5-second count down). That is slower than most games I play online, but every game felt so fast! I was in time trouble during each round except the second (in which I managed to lose rather quickly). We were not required to record our moves because of the quick time control, but I tried to in the first three rounds (until I felt I might lose on time if I kept writing). Below are the games as far as I recorded/remembered them along with some notes.

I got the white pieces in the first round, made an illegal move, and then finally got the checkmate with only a few seconds on my clock.

The pivotal position in this game, and probably the most instructive for me from the tournament, arises after 18…​fxe6: 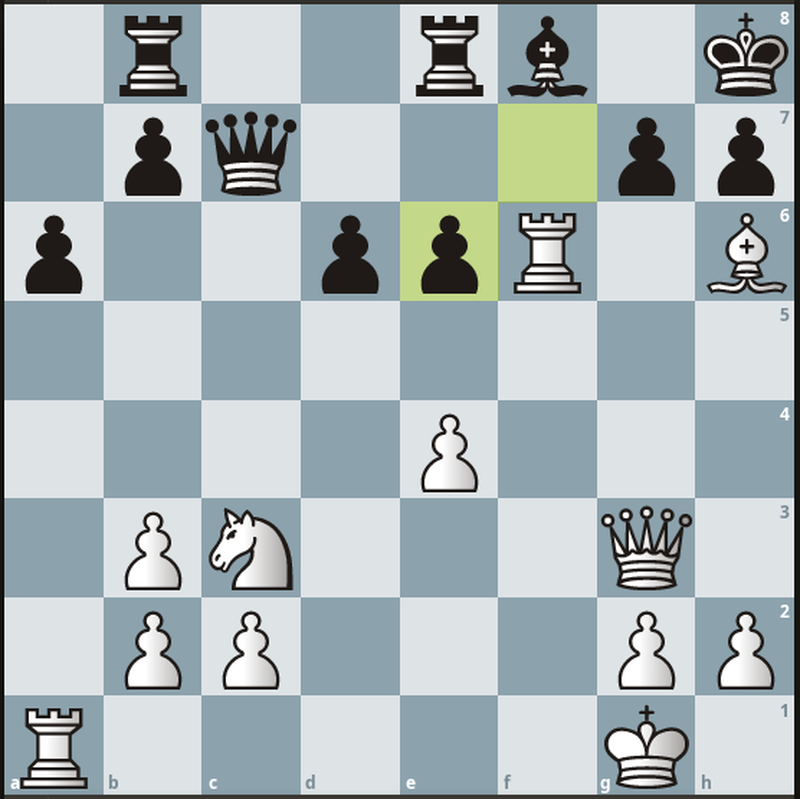 Should white go up in material with Rxf8+ or retreat the rook and let black double her h pawns?

Here I have a chance to go up slightly in material with 19.Rxf8+, or to retreat my rook and let black double her h pawns after taking my bishop. I made the wrong decision. Much better than 19.Rf3 (in which my attack is completely neutralized) would have been 19.Rxf8+ Rxf8 20.Bf4. In the resulting position I still need to get my knight active, but once I do I have two active minor pieces against black’s rook in a dynamic position (where pawn structure is less important).

Later in the game (after 36…​Rxc3+) I didn’t realize I was in check and made a move that left me in check. Oops! We kept playing (after I undid the move and moved out of check), but asked afterward what the penalty is in that situation. We were told that if she had called the arbiter over then she would have had 2 minutes added to her clock. That made us both feel better, since she was already so far ahead on the clock that it probably would not have made a difference.

In the second round I found myself at Board 2 with the black pieces facing a much higher-rated opponent (probably the strongest player I’ve played other than the time I played IM Danny Rensch in a simul exhibition).

I was happy with the not terrible middle game position we reached, until I blundered on move 26.

My opponent in this round would go on to a perfect 4-0 score and win the tournament outright.

This one was disappointing. My opponent made a mistake in the opening which gave me a much better position, but then I tried so hard to force a win instead of playing solidly that I lost.

In this round I decided not to keep notation, which definitely allowed me to move more quickly, but is the game I remember the best (I’m not positive of the opening move orders, but it gets to all the essential positions).

I had a difficult time defending my pawns in the end game and white was gaining the upper hand when he blundered with 35.g4. He played that move pretty quickly (despite being ahead on time). I think he wanted to make a passed pawn. But before he hit the clock he hesitated — he saw how strong my en passant was, but he had already touched the pawn so it was too late. He made an attempt at finding a stalemate but I was able to win fairly easily.