Thanks to my sister injuring her knee, I got a discounted entry to the McDowell Mountain Frenzy trail race near Phoenix on December 1st, four weeks after my marathon. She was signed up for the 50K, but I opted for the 25K, because shorter. My Dad signed up for the 5 mile race and we made a trail race weekend out of it: we flew out together, stayed at an Airbnb the night before and after the race, ate lots of pizza, then flew home.

We got to the starting area a good 15 minutes before Google had predicted (which is good, because otherwise it would have been tight). That gave us plenty of time to pick up our packets, use the portable toilets, watch the 50K start (the 50 milers had already started before we got there), and admire some of the desert flora before the 25K start at 7:45am.

The 25K course consists of two loops on mountain bike single-track and avoids the big climbs that the 50K and 50 mile runners would go over:

I didn’t really know what to expect, but with only around 1,000 feet of total elevation gain over 25K, I figured I should be able to maintain about my marathon pace — somewhere between 4:30 and 4:40 min./km (7:15 and 7:30 min./mile). If I could do that I’d finish somewhere just under 2 hours which, according to previous years' results, would put me in the top 10. So that was my goal at the start.

Within about a kilometer we had mostly sorted ourselves out and there was very little passing. I had fallen in behind a small group going about my pace that was slowly stretching out. We reached a sign that read “Double Dip” followed by two short but very steep descents (some other features along the course were named thanks to mountain bikers). I ran down these hard, taking advantage of them to pass the woman in front of me, but I immediately regretted it as my quadriceps felt much more beat up by the downhill than I had expected.

For the most part the trail was nice and sandy, with a few rocky bits (especially at wash crossings), and some tight turns with fun banked corners. There were several more very short, steep dips along the course, and even though I approached them with more respect each one left my quads noticeably in further disrepair.

I was passed twice near the one mile mark; both guys glided past and up out of sight seemingly without effort. I think they finished 1st and 2nd. My dad told me that they had started way after everyone else.

I also passed one more person, the last for the rest of the race. When the guy in front of me began to slow down a little I decided to keep up my 4:40 min/km pace and go ahead. Now there was no one else in sight ahead of me (I would occasionally see the next guy at the top of climbs, but he would always have vanished by the time I got to the downhill), so I had to remember to stay on course. Luckily all the turns were well-marked, because I had little idea where I was. I would sometimes see runners in various directions, probably doing a different distance, but wouldn’t know if they were ahead of me or behind me or on a completely different trail.

I kept my 4:40 pace for three kilometers (7:30 pace for two miles) when my watch (an old Garmin 305) started to beep incessantly with a warning about running out of space to save data. So I shut it off and ran by feel. The pace felt surprisingly hard, but I decided to trust my recent (road) marathon that I’d be able to hold on to it despite the trailiness of this race.

Without my watch the distances somehow felt longer. It was two more miles to the first aid station, but it felt more like four. Somewhere along the line I realized that I’d be running for around two hours and should probably take in some carbohydrates. At the first aid station most of the food was boxed up — and the volunteers seemed surprised that I wanted anything — but I grabbed an orange slice. Actually at all the aid stations the volunteers were very nice (and eager to make sure I got water or Gatorade in my handheld water bottle) but seemed surprised that I wanted to eat something; maybe because I was only doing the 25K? Probably no one in front of me was taking food.

The next aid station was about 3.5 miles along. Again it felt longer. I got some cookies and Gatorade. Then it was about 2.5 miles back to the start/finish line, including a nice down hill portion and then some ups-and-downs to complete the first loop. If it weren’t for the down hill I would have slowed down significantly here. I could feel myself fading, and my quads were just not recovering.

Already slower than I expected, and feeling tired, I grabbed several ginger snaps and oreos at the last aid station before beginning the second loop. The prospect of running 5.5 more miles, including another go on the Double Dip, did not sound very fun, but at least I could eat some cookies on the way.

The second loop didn’t seem as difficult on my legs as the first loop, but I think that is mostly just because I was going so much slower. The second lap is a figure-8: the course crosses itself at a culvert, first crossing over and then going through a large corrugated metal tunnel.

As I ran over the tunnel I could see a few 5-milers getting toward the end of their run. This was motivating and I tried to get going a little faster. Just before I got to the tunnel myself I was overtaken by a runner and could hear another one not far behind. This gave me some more motivation, and I was able to stay right with the guy who passed me for several hundred meters until I looked up and saw the final climb suddenly looming immediately ahead. It’s only a bit over 100 feet up, but it was steep enough to cause my legs to lose hope. I wasn’t even sure I’d make it up without walking; I moved to the right and continued to barely jog up as the other runner behind me sped up and past me. They were both out of sight by the time I got to the top. My legs were too beat to do the final descent very fast, but I did what I could and finally reached the finish line in a time of 2:04:44!

Someone handed me a finishers glass (my favorite kind of race swag!) and the guy who passed me on the final hill (and finished almost 2 minutes ahead of me) turned around to give me a fist bump. 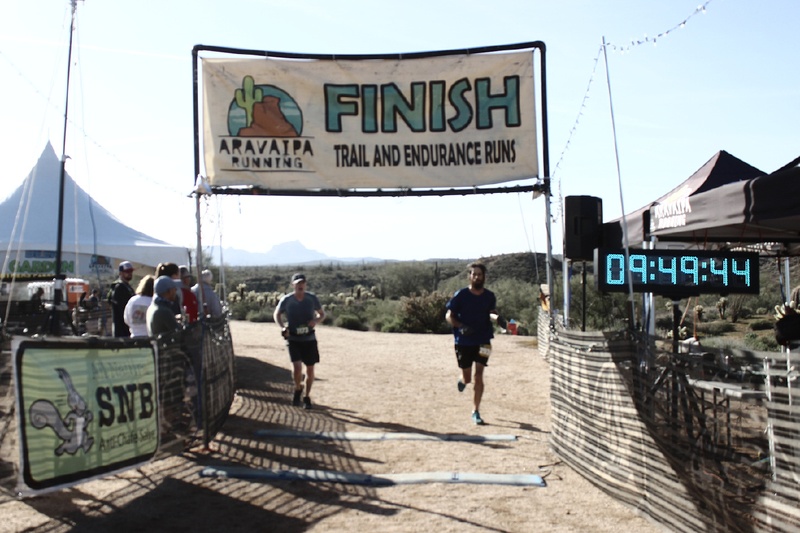 My dad had already finished his 5 mile run and was at the finish to greet me. We partook in the after-race food (including soda pop and grilled cheese sandwiches!) and spent a little bit of time walking around the desert. McDowell Mountain Park is in the foothills near the town of Fountain Hills, and I think we saw in the distance the famous fountain which gives the town its name.

As I’m writing this it has been two weeks since the race and my quadriceps on my right leg are still not fully recovered. I tried getting them dry needled last week, without any noticeable improvement. (I’ve done a hard half marathon, a full marathon, and a trail 25K each four weeks after the last one, so there may be some accumulated fatigue from that going on). If I were to do this or similar race again I would definitely approach the steep downhill bits with more respect, and I’d do more downhill practice during training.

The race itself was very well organized. It was my first Aravaipa event, though I recognize Jamil Coury from his Run Steep Get High Youtube channel. They definitely seem to know what they are doing. The 50K option at this race seemed like it would make an excellent first ultramarathon.

Before heading back to our Aribnb, my dad and I stopped at Fountain Park in Fountain Hills and walked around until the fountain went off. 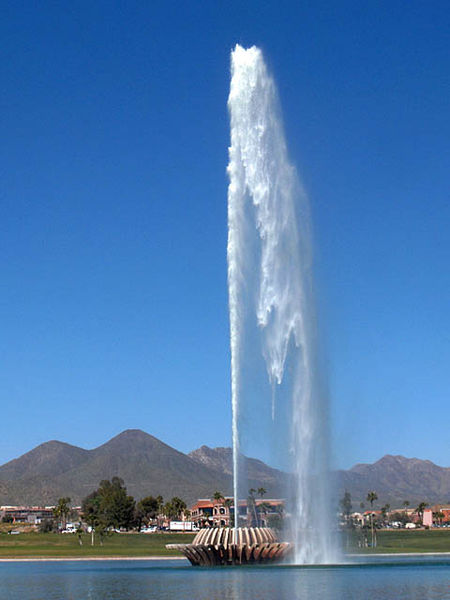 My lifelong running goal which I’d like to accomplish by the end of 2018 is to run a 5K race in under 20:00. I tried last Saturday at Parkrun and failed (20:16). I think the problem last week was that I know I’m in sub-20:00 shape, so I expected it to be easy. But of course it is never easy, so when I got uncomfortable I just gave up. My sore right quadriceps might have held me back a bit too. I’m hoping in two weeks to try again with more realistic expectations and more determination.