I ran my first 10K road race when I was 12 years old (55:37), and I’ve felt like a runner ever since. In high school I ran on the cross country team for almost two years before becoming academically ineligible. Unfortunately I wasn’t any more disciplined at training than I was at attending class. A good 5K race for me was under 21:00, and I think an average race for me was around 22:00 or slower. The slowest varsity guys in my school’s division could reliably break 20:00, and that became my goal even post-high school.

A lifelong goal, it turns out, because in my experience running 5K in under 20 minutes is almost impossible. My hobbyjogger technique of training every spring for a 5K and 10K in May and then slacking during the summer and hibernating during the winter before starting over again wasn’t getting me great results, anyway. In 2008-2009, almost 8 years after high school, I was a bit more consistent (trained for my first marathon) and came close to breaking 20:00 several times including a 20:05 PR.

It helped that I discovered a local Parkrun, a free timed 5K run every Saturday. Unfortunately this winter’s snow schedule kept everything icy and conspired against my planned interval workout several weeks in a row. On December 15, without much time left to meet my 2018 goal, I ran hard at Parkrun. 20:16. So close. As usual my first and last kilometer were my fastest, and I slowed way down during the 3rd kilometer. I decided to try again in two weeks, the last Parkrun of 2018. There was some packed snow on the course, but this time I maintained a harder effort during the middle kilometers and finished in…​ 20:27. Huh.

It wasn’t going to happen in 2018, but I had a chance at redemption in January at a local Oatmeal Festival 5K I run every year. I accidentally left my watch at home the morning of the race. But I know what a good 5K pace is supposed to feel like (hard) and thought running entirely by feel might actually help me. While we were lined up at the start line the race organizers made an announcement that they had shortened the course because of the icy conditions. I ended up running well (first in my age group) and finished in 16:58…​ but since I didn’t have my GPS watch on I don’t know how far it was. Using the distance someone else measured I calculated I was on 19:17 5K pace, but that seems overly optimistic.

My next formal race and chance at 20-minute glory was on May 4th at a hometown 5K that I run every year which is a fund raiser for a local elementary school. That gave me over three months to focus on 5K training, and I hoped I’d also go under 20:00 at Parkrun at least once before then. I got Faster Road Racing by Pfitzinger and Latter with the intention of following one of their 5K plans. Unfortunately it continued to snow every week through April, and my motivation flagged (I didn’t really track my mileage but it was probably closer to 30 than the 40+ miles I intended to keep up).

One problem was that I didn’t really enjoy the Pfitzinger plan and its lack of variety. It calls for only two lactate threshold (tempo) runs, both in the first three weeks of the schedule, which is a pace I learned to like during my Jack Daniels marathon training. I know the science behind tempo runs has been questioned, but running harder than usual but still slower than my VO2max I think is very beneficial to me psychologically without leaving me too tired. One thing I wanted to try this training cycle that I’ve never done before is faster interval work — my usual intervals are 1KM at about 5K pace. The Pfitz plan has one VO2max interval workout per week, but the only speed work is strides after some runs.

So I deviated from the book’s schedule, using it only as a very rough guide, and instead most weeks followed my own ad-hoc plan structured around an interval workout, a tempo pace Parkrun every Saturday, and a long run:

For my mid-week intervals I began alternating VO2max (5x1000m at a little faster than 5K pace) with speed (10x400m at about mile pace). I only got two of the speed workouts in before my May 4th race, and after the first one my legs were sore for days — an indication I think that I need more of that stimulus in my training. My long runs were usually on the short side, and even when I did 10+ miles I often slacked and broke them into two runs. I’m always afraid I’m going to get bored, but running longer and more consistent long runs is probably easy way for me to improve in the future.

On April 6 I ran a 19:48 at Parkrun! It didn’t even feel like a harder effort than my usual 20:30 runs, though I had done fewer miles that week so my legs were better rested. The night before the run my little sister took me to see the most wholesome and repetitive ska band ever (which is saying something), so maybe that helped, and luckily I’m too shy to dance much so my legs didn’t suffer from it. With a month of training and a full taper I was pretty sure I could finish even faster at my upcoming 5K race. The Parkrun course is very flat, but it is about 1/3 on a dirt trail and has two 180-degree turnarounds which break my rhythm and slow me down. The race course, on the other hand, has a long downhill during the 2nd kilometer, then the entire 3rd kilometer is back uphill (it’s a loop, so zero net elevation gain), but it is all on hard surfaces with no turnarounds, so I thought it would be a faster course overall. Then again, hills are difficult to pace.

Once the snow stopped lingering another of nature’s stumbling blocks presented itself like it does every April around here: patches of beautiful little purple flowers that suffocate me. It’s called blue mustard Chorispora tenella, but in homage to midwestern 90s ska bands everywhere I call them blue meanies because I am very sensitive to the pollen of these little respiratory mustard plugs. If there is a patch of them within a few meters of me their stench hits me (hits me! hits me!) with a sensation of not being able to breathe. I think probably they don’t actually diminish much if at all the amount of oxygen my lungs take in, but it feels like inhaling does nothing. Every Spring for about a month they make my usual running trails, including part of the 5K race course, a little less pleasant.

Interestingly, other people I’ve talked to about the flowers aren’t bothered by them, and can’t even smell them unless they get very close. One article I found even claims of blue mustard that “There is no noticeable floral scent,” which is a lie. 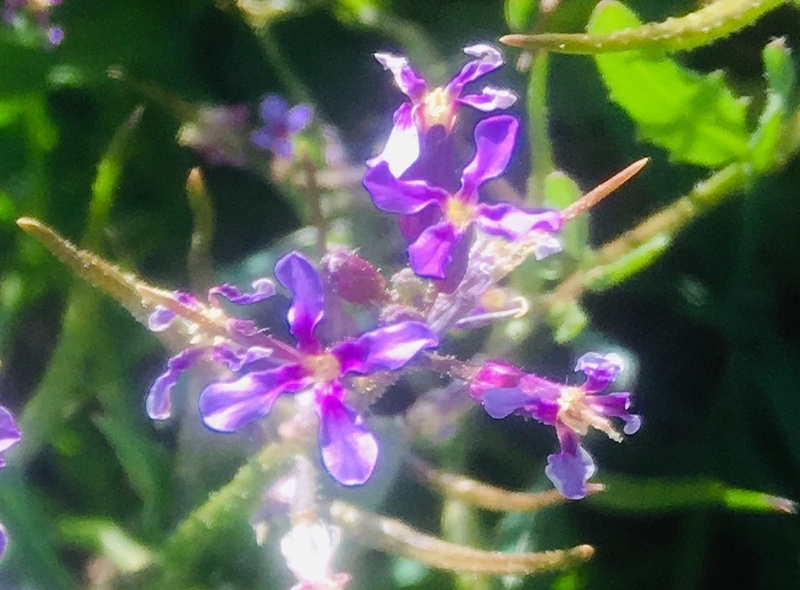 This particular blue meanie specimen lives with hundreds of its kin on the 5K course right at the top of the hill where mile 3 begins. Photo by Louis Burkhardt.

I came up with a pace plan based on the course hills. I knew the 3rd kilometer would be slow because it is all uphill, and I don’t think I’ve ever run a 4th kilometer of a 5K in under 4:00, but I was optimistic:

I lined up in the second layer of runners at the start. The front line was mostly elementary school kids. I was a little bit worried about running someone over, but they all went out way faster than me. The only person in front of the kids after the first 50 meters was the man who would go on to be the overall winner (15:25). Within a 100 meters or so the course takes a left turn up a short but noticeable hill where most of the kids faded back. I know from experience that it is possible to run this hill too hard and never really recover, so I allowed myself to slow down and stay relaxed on the way up.

The kids pulled me along to a faster start than I had planned, but it probably worked out for the best since I felt good and in control after the first kilometer. I felt better than I’ve ever felt at that point on the course in the past despite being faster than my planned split. I was passed by one man on the first hill, but passed him back during the second kilometer just before the long downhill. From that point on my position stayed fixed. There was a woman about 40 meters ahead of me; my plan was to try to catch her on the downhill and then stay with her during the tough 3rd kilometer where I traditionally fall apart.

I gained only a little bit of ground on her during the downhill. She caught and passed the woman in front of her, but then they both stayed together and held the pace better than me as the uphill began. At the top of the hill I got some motivation to accelerate for a few hundred meters as the scent of the blue meanies hit me, but the two runners in front of me were still slowly pulling away. My goal became to simply keep them in sight, which I did during the 4th kilometer, but the last kilometer curves around the school building so with about 500 meters left I had lost sight of them along with any mimetic motivation to kick to the finish. But at least I managed to maintain a sub-4:00/km pace and crossed the line in 19:48.

This race usually attracts some strong local competition with the top 5 men running under 16:00 and the top 5 women running under 19:00. But they didn’t hold it last year, so I guess they lost some momentum because I took 6th place overall…​ and I was the second-place man.

I don’t mean to complain about being given an award, and it is entertaining to watch gender essentialists of all stripes trip over their own contradictions especially with Caster Semenya's case in the news recently, but it does seem a little bit silly to be on the podium while two of the women who beat me walk away empty-handed given that the whole point of sports gender divisions is to recognize athletes who don’t enjoy whatever biological (and, to a hopefully diminishing degree, social) advantages are conferred to men. There’s got to be a better way. I’d suggest two categories: “open” to recognize the top three finishers regardless of gender and “non-men” to recognize the next three non-men finishers.

That scheme is not perfect and still suffers from the shortcomings of the “men” and “women” divisions, including a possible bias toward androgenic (like intersex and trans) women in the “non-men” category, but it pushes those shortcomings further toward the noise floor of the variance between socially-recognized genders. It would solve the most common absurdities, at least, like awarding me a 2nd-place prize just because I’m a man and most of the five people who beat me are women.

Anyway, I thought I would soundly beat my Parkrun PR, and instead I exactly matched it with a great deal of difficulty. Still, at least I am a consistent sub 20:00 5K runner now, and it only took me 18 years of trying!

I’m currently in my taper week for the Bolder Boulder at the end of May (which is the 10K race that usually gets me running again every year). My next lifelong goal is to run that race in under 40:00, but I don’t think I’m quite there yet. My goal for this year is 41:00.